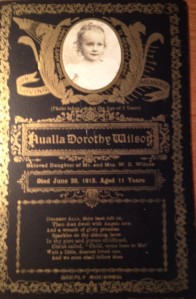 Work has begun in earnest on my latest project – Dear Madman – a creative non-fiction exploration of the murder of my Grandmother’s sister as a child in 1912. For the past few weeks I’ve been trekking out to the QLD State Archives at Runcorn and discovering the wonders kept there. Court documents, prison records, maps and more. Not only was it enormous fun leafing through the precious old documents, all handwritten in styles varying from pristine copperplate to the hurried scrawl of police officers taking down witness testimonies, it was also a delight to have somewhere warm to sit on cold winter days. My home office is chilly at the best of times in winter and downright unbearable when the sun doesn’t shine. Not only that, the Archives staff were kind and helpful, as were other people I met there, especially Dorothy who, though in her eighties, travelled two hours each way on buses to help compile state school records.

I found some great information to help me uncover the truth of the family myths surrounding the murder but, frustratingly, some records were incomplete or missing. For example, the prison records for Boggo Road Gaol, where the murderer was imprisoned, are missing a chunk of thirty years from just before the turn of the century. ARGH!
They had two photos recorded of the murderer, but none had survived. Double ARGH!

However, just as I had given up hope of ever seeing his face, I expanded my search on the miraculous online resource of digitised newspapers, Trove, and found him. Not nearly as ugly as I had imagined, but if I stare at him for long enough, I see a definite glint of madness – or is it meanness- in his eyes.

And now, I am becoming obsessed with this story. It fills my mind during the day, steals hours when I should be cooking dinner or helping with homework or sleeping. I dream of it, and wake up wondering what new information I will find. The only book I want to read is the one I’m writing. But the finished version!

2 thoughts on “MINING THE ARCHIVES”