YAY! Tomorrow I’m off on writing retreat – just me this time. I’m heading five hours south to a beautiful secluded beach and an air-conditioned cabin where I can focus exclusively on my screenplay. My office here at home is a corner of the living room which these days at least has a screen around it. Through most of summer it’s almost impossible to work here though because it’s so hot that my brain turns into some sort of south east Asian hot pot stew, even with a fan blowing straight on me and all of my papers.

Time away on retreat – this time I have a full glorious two weeks (thank you Screen Queensland!) – makes all the difference when you have a big project to tackle. Time alone with just you and the work enables you to immerse yourself in the world of the story you are creating without distractions and everyday responsibilities. Everything else slides away and you become just a conduit for the work you are creating – a little crazed perhaps-  but focused and productive. Well, I hope so anyway.

My days will go something like this – an early morning walk, swim and yoga on the beach, then home for breakfast and writing.  More writing. Lunch then a break for breathing and sivasana (or maybe just a nap!). Another beach trip for extra swimming and an explore, then home for more writing. Writing. Writing. Dinner. Then some relax and wind down time so I’ll be able to sleep without my head buzzing with the story – though my dreams will most probably be filled with it.

Four years ago around this time of year, I spent a wonderful two weeks at Varuna the Writers House in the Blue Mountains writing the first draft of the novel that this screenplay is now so very loosely based upon. In two weeks I wrote over 60 000 words, so I’m hopeful that my fortnight at the beach now will result in the same frenzied output and I’ll be bringing back a completed screenplay.

It’s going to be a grand adventure! 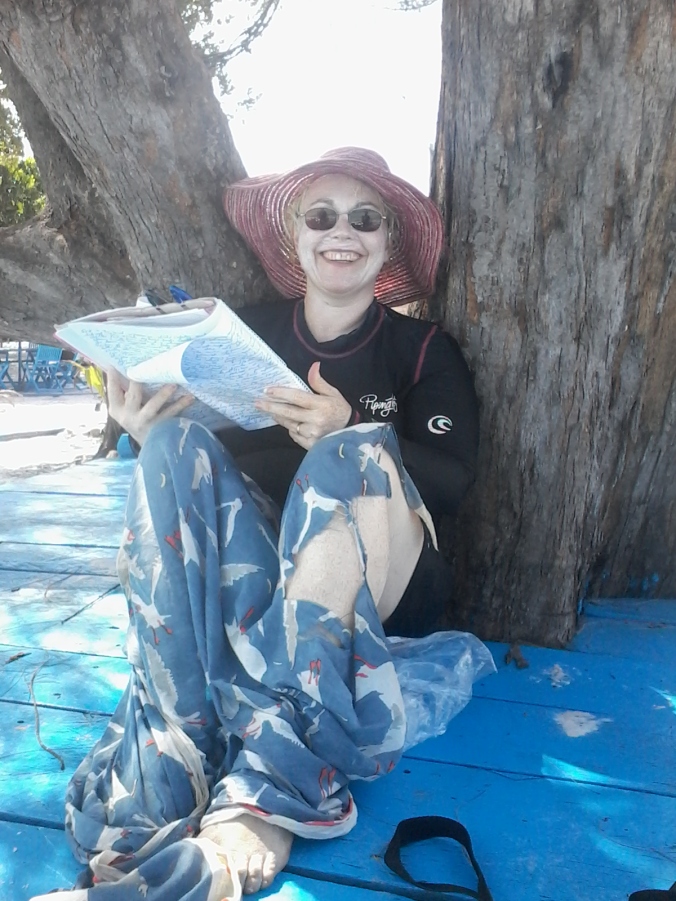 See you when I get home 🙂 xx

Interested in a writing retreat of your own? There are still a few place left in the next Relax and Write Retreat – click HERE for more details. 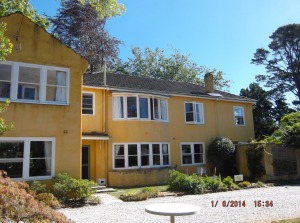 Varuna the Writers’ House from the front

I’ve just returned from a magical two weeks at Varuna the National Writers’house in Katoomba in the Blue Mountains west of Sydney. For over twenty years, writers from Australia and around the world have been coming to Varuna to retreat and write. All made possible by Mick Dark’s generous donation of the house and grounds where his parents, environmentalists and writers Eric and Eleanor Dark, lived and worked.

After applying for Varuna’s many programmes for over eight years, I finally scored a 2nd book fellowship. I’d been waiting a long time to get there so my first day was spent in the blissful haze of a waking dream achieved.

I was lucky enough to have been allocated Eleanor’s studio as my work-space and it worked a treat. A framed poem by Eleanor said it all in the first few lines.
“This is the excursion, interlude, respite
From the house, from the broom and the soapsuds
Foaming in the copper…” (extract from poem by Elanor Dark)

I arrived thinking I was going to be writing a memoir, and left two weeks later with the complete first draft of a novel, Dear Madman. My first morning in the house, I woke up with the madman’s voice strong in my mind and with a clear vision of how the book wanted to be. THANK YOU ELEANOR!

I was inspired to keep writing on by the following photograph of Eleanor with her massive manuscript for Storm of Time that looked down on me from the wall of the studio. 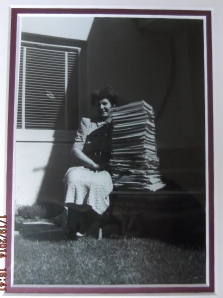 And also by this, which I found in one of the drawers under the bookshelves. It is a tradition at Varuna for writers who use the studio to leave a piece of writing behind.

You are NOT here to
sleepreaddrinkfornicatepontificate
(strike out inapplicable)
The whip crack! to your tower or
dungeon desk now. I command you.

There was no name attached. Would love to know who wrote it.

Whatever it was, a combination of all things, I averaged over 5000 words a day! It’s amazing how much time and head-space was opened up with all household demands removed. Joan took care of the cleaning and shopping and dear Sheila cooked up wonderful meals every evening.

Jansis, the director, Vera and Brian in the office took care of all the admin, keeping and protecting the space for us. Which brings me to the lovely writers I shared this experience with – The Francothropes – so called because of a mutual disdain for poor old deluded James Franco. It was a delight to go for a thinking break and stroll around the gardens and to look up to see everyone beavering away at their desks. A community of writers all working hard. LOVED IT!

It wasn’t all hard work however, every evening we sat down to one of Sheila’s beautiful meals and glasses of wine and talked and laughed and did readings and ceremonial burnings in the fireplace of Fifty Shades of Grey, until we even sickened ourselves. I cannot thank Sarah Schmidt, Vahdia Berborovic, Brett Dionysius and Jo Chipperfield enough for the pleasure of their company. If they’d stayed one more week we’d have had a musical up and running. Yes, all singing, all dancing – and bird watching too. 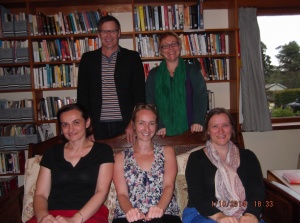 Ghosts? Did anyone say ghosts? Let’s just say a few “incidents” were reported, the clearing of throats, a pressure on the bed. And this turned up in my photos –

In the maid’s garden

It really was a magnificent time and I’m so relieved to have been able to come away with an entire first draft to rework over the year. Varuna has a special magic, so enter, apply, donate and go!

Inspired by our resident poet Brett, I even wrote my own poem about it.

There is magic in the walls here.
Not just Eleanor and the Dark’s great gift.
Not only the clouds floating past the window,
And a fire in the grate in the middle of summer.
Not the dance and call of the cockatoos,
Or the ghost gums,
and ripe plums in the garden.

It’s in the air,
The sweat of every writer who has ever sat at this desk
And poured words onto the page.
Writing like furies, building worlds,
Singing songs, telling tales, crying, laughing,
Healing ancient pain.
“Write!” they say. “Just write.”